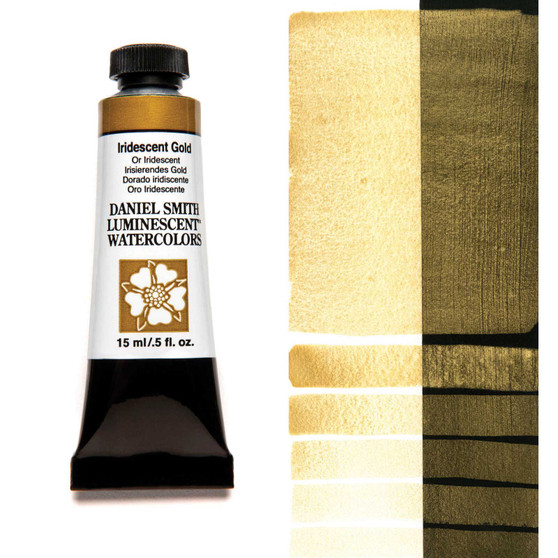 Iridescent Gold is the quintessential gold shade - bright, reflective and regal. Iridescent colors reflect light and their transparent quality adds a fascinating sense of depth to your work. Why Luminescent Watercolors? Nature has optical surprises in the colors that you see in birds' feathers, insects, fish, and seashells, many flowers also have a pearly, dewy sheen to them. Consider the iridescence of a snail's trail or a silvery spider's web. Other things that also have a sparkle, or glow depending on the light, a silvery or golden moon, clouds aglow at sunset, rainbows, the sparkle of snow and ice, and glint of water reflections. Don't forget the sheen of metals like pewter, copper, silver, and gold. There are also mythic subjects that are often thought of as having a special iridescence to them such as fairies, dragons, mermaids and other fantasy figures. DANIEL SMITH Luminescent Watercolors add that touch of special color found in nature that regular colors cannot match. They're made from mica pigment, thin transparent particles coated with highly reflective metal oxides. Luminescent Watercolors show best as glazes over darker colors and are excellent mixed with other colors adding a bit of their luminescent glow.

Iridescent Antique Gold has a deep shine without the bright, brassy quality found in some metallic g…

Iridescent Scarab Red is a complex burgundy with a delicate surface sparkle of blue-green pigment. I…

Iridescent Topaz is a pale yellow-gold with just the slightest hint of a green undertone. Iridescent…

A beautiful granulating pigment from South Africa, Sugilite is another standout in DANIEL SMITH's li…

The most vivid of all pinks, has long been requested by DANIEL SMITH customers. A primary magenta wi…

Made from jewelry-quality stone, this versatile rose pink is wonderful for portraits and landscapes.…