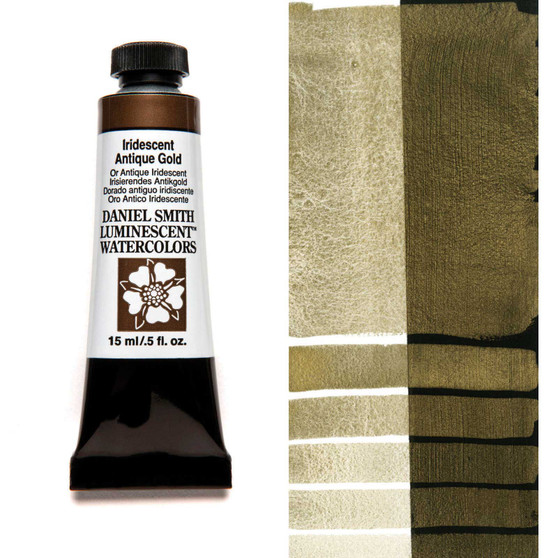 Iridescent Antique Gold has a deep shine without the bright, brassy quality found in some metallic gold watercolors. Iridescent watercolors, part of the DANIEL SMITH Luminescent Watercolors collection, reflect light, causing it to scatter, and their transparent quality adds a fascinating sense of depth to your work. Why choose Luminescent Watercolors? Because Nature has optical surprises in the colors that you see in birds' feathers, insects, fish, and seashells, many flowers also have a pearly, dewy sheen to them. Consider the iridescence of a snail's trail or a silvery spider's web. Other things that also have a sparkle, or glow depending on the light, a silvery or golden moon, clouds aglow at sunset, rainbows, the sparkle of snow and ice, and glint of water reflections. Don't forget the sheen of metals like pewter, copper, silver, and gold. There are also mythic subjects that are often thought of as having a special iridescence to them such as fairies, dragons, mermaids and other fantasy figures. DANIEL SMITH Luminescent Watercolors add that touch of special color found in nature that regular colors cannot match. They're made from mica pigment, thin transparent particles coated with highly reflective metal oxides. Luminescent Watercolors show best as glazes over darker colors and are excellent mixed with other colors adding a bit of their luminescent glow.

Kid Made Modern Paint Your Own Ice Cream Cone

Create a triple-scoop stack of painted and sprinkled treats with this awesome kit. First, paint your…

Kid Made Modern Design Your Own Felt Stocking Kit

Hang a handcrafted beauty from your mantel this holiday season. Kit includes everything you need to …

This 12-Color Set is encased in a sturdy, plastic tray with a snap-shut lid that doubles as a palett…

Ideal for those new to the medium, these sets feature transparent watercolors and a step-by-step pla…

Coloring will always be an adventure with the Giant Crazy Crayon. With 64 colors smushed together to…

STABILO WOODY 3-in-1 WATERCOLOR PENCIL BY SCHWAN-STABILO: This chunky pencil functions as a colored …