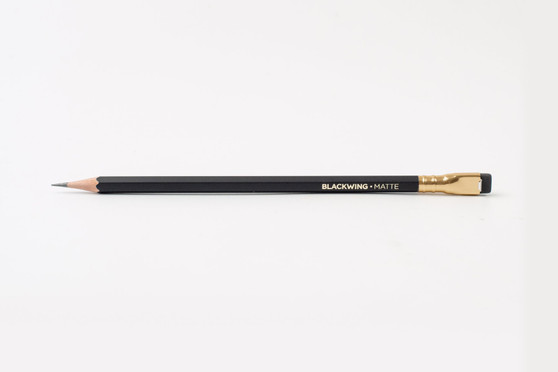 The return of the legendary pencil with the huge cult following: the Blackwing graphite pencil, which was originally produced by Eberhard Faber. The Blackwing was the favored pencil of Frank Lloyd Wright, Stephen Sondheim, John Steinbeck and Chuck Jones, and many others. It was distinctive for its smooth lead and its flattened, square eraser.

Discontinued in the late 1990s, the Blackwing's reputation grew as remaining stock dwindled, driving online prices for boxes or even single pencils up astronomically. In 2010, Charles Berolzheimer revived the pencil for Palomino. Two versions are now produced: the version closest to its original form for devotees is the Palomino Blackwing 602, with a metallic grey shaft. Palomino also offers a modified, softer lead version for artists, known simply as the Palomino Blackwing, with a matte black shaft. Both shaft finishes reflect different eras from the Blackwing's history, the grey shaft being from the pencil's later years.

Sold in a box of a dozen pencils. Eraser replacements available.

Updated look and design! The Blackwing Natural features an exposed Incense-cedar barrel with a subtl…

The Golden Ratio is a mathematical ratio often found in nature, art, and design. It gives the world …

The return of the legendary pencil with the huge cult following: the Blackwing graphite pencil, whic…

Updated look and design! The Blackwing Natural features an exposed Incense-cedar barrel with a subtl…

Despite his image as an international movie star and acclaimed martial artist, Bruce Lee was a philo…

Steve Mitchell, creator/founder of The Mind of Watercolor YouTube channel, in cooperation with M. Gr…