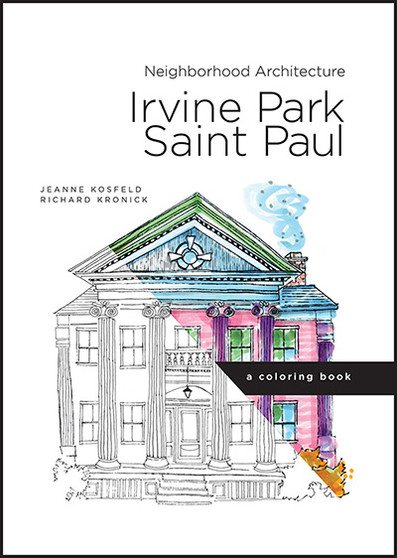 Jeanne Kosfeld and Richard Kronick have created a unique first book featuring the lovely Irvine Park neighborhood. Readers may color or paint eighteen sketches of old homes while learning about the area’s history and architecture.

Neighborhood Architecture – Irvine Park, Saint Paul: a coloring book is available in softcover with eighteen house sketches, brief histories of the homes’ owners and architecture; and an architectural style guide and glossary at the end of the forty-eight-page book. Cost is $20; $18 for RCHS members.
Order at https://publishing.rchs.com/publishing/books/ or use the order form here.

What began as a casual sketch outing in Saint Paul’s charming Irvine Park neighborhood during the early days of the COVID-19 pandemic became Neighborhood Architecture – Irvine Park, Saint Paul: a coloring book. Twin Cities-based illustrator Jeanne Kosfeld and author Richard Kronick have together transformed a simple sketchbook featuring pen and ink drawings into a brief storytelling of the Irvine Park neighborhood’s unique 172-year history. Artists of all ages and abilities may colorize their own imagined versions of these historic edifices, including fanciful Queen Anne-style homes, simple clapboard houses, and elaborate French Second Empire-style mansions, while learning about the architecture and history of the area and its inhabitants at the same time.

John R. Irvine arrived in Saint Paul in 1843 and made his money selling real estate. In 1849, the year the Territory of Minnesota was established, the area around the Upper Landing became one of the city’s first residential neighborhoods, where Irvine donated a square plot of land at the top of the bluff as a city park. As the territory and its capital city grew, residents, including Irvine, built relatively modest houses there. Over time, larger, more majestic homes claimed their places around the park, which was eventually named for Irvine in 1872. In 1881, the City of Saint Paul installed a central fountain. The area attracted many prominent citizens, including Alexander Ramsey, a territorial and state governor; Dr. Justus Ohage; Michael Murray, who owned Northern Cooperage Company; and, Elizabeth Robbins, who as a widow, purchased land and had her Queen Anne-style home built at 40 Irvine Park, where she, her sister, and a boarder lived for many years.

A slow, steady deterioration of Irvine Park began around the turn of the twentieth century and continued through the Great Depression, World War II, and into the early 1970s. In 1971, the West Seventh Street Association proposed that the Saint Paul Housing and Redevelopment Authority level and redevelop four blocks of the Irvine Park neighborhood. Residents dissented. Since then, with support from city officials, homeowners have restored dozens of buildings and moved houses to fill in vacant sites around the park. In 1973, the Irvine Park neighborhood was listed on the National Register of Historic Places, the city’s first designated historic district.

This coloring book, the first in a series of Saint Paul neighborhoods featuring local architecture and history, is published by Ramsey County Historical Society (RCHS) and celebrates the far-reaching results of the Irvine Park residents’ hard work and dedication.

Discover the tranquility of Japanese landscape and design with this wonderful coloring book. 55 illu…

Cézanne at his most modern: a major career-spanning appraisal of his extraordinarily experime…

Discover the healing beauty of the natural world with 500+ stickers Whether you're an artist, decora…

The Arts and Crafts style of art and design started in the last half of the 1800s, and is still popu…

Chromatics is the science of color, and this Tornado will take your visual perceptions to a scientif…