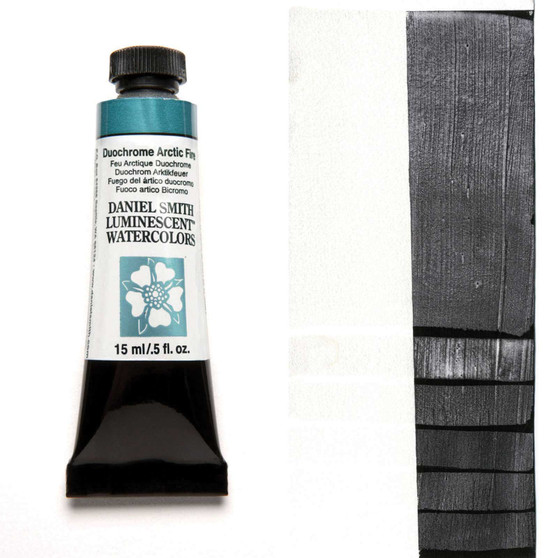 Duochrome Arctic Fire shows its colors best over black paper or darker watercolor; it shifts from reflective green to violet. Duochrome Watercolors, part of the DANIEL SMITH Luminescent Watercolors collection, alternate between two distinct colors depending on the reflective light. Why choose Luminescent Watercolors? Because Nature has optical surprises in the colors that you see in birds' feathers, insects, fish, and seashells, many flowers also have a pearly, dewy sheen to them. Consider the iridescence of a snail's trail or a silvery spider's web. Other things that also have a sparkle, or glow depending on the light, a silvery or golden moon, clouds aglow at sunset, rainbows, the sparkle of snow and ice, and glint of water reflections. Don't forget the sheen of metals like pewter, copper, silver, and gold. There are also mythic subjects that are often thought of as having a special iridescence to them such as fairies, dragons, mermaids and other fantasy figures. DANIEL SMITH Luminescent Watercolors add that touch of special color found in nature that regular colors cannot match. They're made from mica pigment, thin transparent particles coated with highly reflective metal oxides. Luminescent Watercolors show best as glazes over darker colors and are excellent mixed with other colors adding a bit of their luminescent glow.

Since 1993, DANIEL SMITH Extra Fine Watercolor paints have only been available at two retail locatio…

Duochrome Violet Fantasy shows its colors best over black paper or darker watercolor; it shifts from…

Duochrome Lapis Sunlight shows its colors best over black paper or darker watercolor; it shifts from…

They're reusable! The sticker book series that kids love has a new addition. EyeLike Stickers: Dino…

With their sturdy bullet tips and brilliant, intense colors, these fiber tip pens are perfect for la…

This newest set of earthy, textural tones was created by Nicolas Lopez. Nicolas comes from a fa…

The ultimate guide to visual storytelling! How to make the audience feel the story while they are re…

No matter what stage artists are in their careers, “it’s necessary to look toward the fu…

Oil-based, high gloss enamels for interior and exterior use on metals, wood and glass. Favored among…