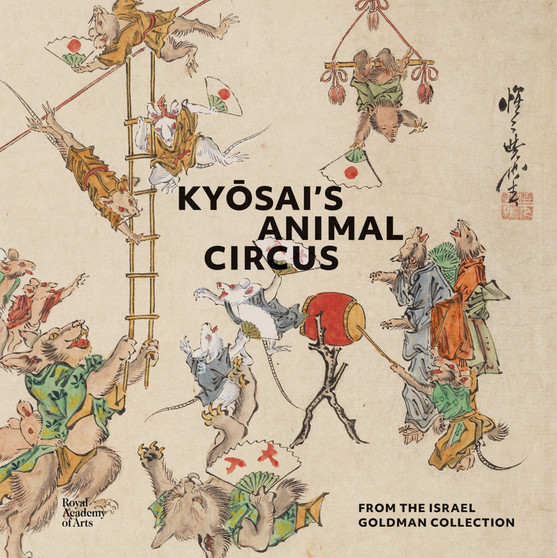 A compact and affordable bestiary of allegorical animals

Kawanabe Kyosai (1831–89) delighted in the depiction of animals—crows with strong personalities, frogs in the schoolroom, rats on trapezes, cats in procession, elephants performing tricks—and frequently used them to satirize contemporary society.

Having been trained as an academic painter, Kyosai would have been aware of traditions in which artists depicted creatures according to the laws of nature—the weak falling prey to the strong—as a commentary on actual society. He delighted in reversing such power relationships, frequently doing so to give an unexpected twist to the conventions of traditional imagery, and he seems particularly to have enjoyed giving smaller animals a chance to get their own back on their predators.

Animal imagery has long occupied a significant place in Japanese art and literature. Each animal possesses a different symbolism for its special abilities or characteristics, and some are associated with deities, religious narratives, particular events or seasons of the year. Agile rabbits are sometimes featured in armor. Puppies were depicted not only for their cute appearance but also because they symbolize fertility and safe birth, and thus the prosperity of the family. “Humanized” creatures often appear in illustrated tales and in social satires.

This enchanting book reveals a cavalcade of Kyosai’s creatures from the renowned Israel Goldman Collection, with an introduction to the artist and his menagerie by Koto Sadamura, a leading authority on Kyosai.

Previously featured on Colossal and with a successful production company and Etsy shop, world-renown…

Discover 100 wonderful and majestic creatures to draw!Whether you have your favourites already, or a…

What separates us from animals? What connects us? Award-winning cartoonists Peter and Maria Hoey pro…

Rosalyn Drexler: Who Does She Think She Is?

Painter, novelist and wrestler, Drexler is the great polymath of Pop Rosalyn Drexler has always move…

Palate Palette: Tasty Illustrations from Around the World

Palate Palette was inspired by a simple but intriguing question: What do the best artists and i…

Appropriately launched on the Autumnal Equinox, Field Notes' limited release for the Fall of 2021 is…

See the world around you in a whole new way with this inspiring guide to nature drawing, urban sketc…

Read This If You Want to Be Great at Painting

Painting isn't as hard as it looks. And it's fun. Whether you're a total beginner or have been paint…

Steve Mitchell, creator/founder of The Mind of Watercolor YouTube channel, in cooperation with M. Gr…

The Art of the Sketchbook Artists and the Creative Diary

For every commercial work released by an artist, countless doodles and sketches remain in sketchbook…