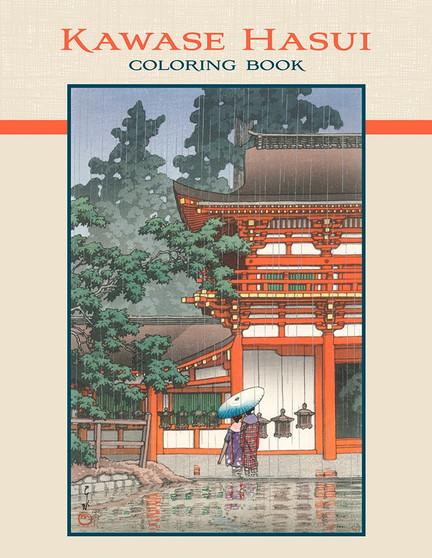 Kawase Hasui was born in Tokyo in 1883. His parents were merchants, but after trying his hand at the family business, Hasui decided it wasn’t for him. Instead, at the age of twenty-five he began studying art at the school of master Japanese painter Kaburagi Kiyokata, where his great talent soon became apparent. In 1916 he met publisher Watanabe Shozaburo, who began turning Hasui’s watercolor paintings into woodblock prints for sale on the world market. The prints became especially popular in the United States and made Hasui famous and financially successful. His pictures showed scenes of rural Japan, often emphasizing the seasons: flowers in spring, bright sunshine in summer, turning leaves in fall, and snow scenes in winter. In 1956, near the end of his life, the Japanese government honored Hasui as a “Living National Treasure."

This coloring book holds twenty-two of Hasui’s beautiful images that have been traced for you to color. The full-color originals are shown as small pictures on the inside front and back covers. When you color in the tracings, you can copy Hasui’s original colors and style, or you might decide to try something completely different. The last page of the book is blank so you can draw and color your own picture—perhaps a view of your backyard or a nearby park. Can you capture the feeling of the season the way Hasui did?

William Morris was an English artist and designer who lived from 1834 to 1896. One of his many talen…

Almost 150 years ago, a group of French painters created a shocking new style. Instead of painting t…

Owls live all over the world in habitats that vary from the desert to the forest. Some prefer tree l…

Maybe you’ve had the pleasure of taking a nap under a patchwork quilt, enjoying its bright colors an…

Fairy tales, flowers, food, and fun—you’ll find them all here with a dash of fantasy from the creati…

The decorative designs featured here are timeless examples of Japanese artistry. Although little is …

William Morris was an English artist and designer who lived from 1834 to 1896. One of his many talen…

In the early decades of the 20th century, the United States underwent a period of rapid change. The …

Color with tokidoki! This is the cutest, most irresistible coloring book ever! Featuring the popular…