Doug Argue: Letters to the Future 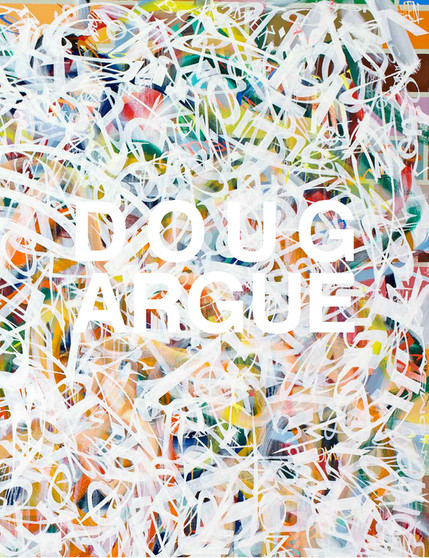 Doug Argue: Letters to the Future

The remarkable creativity of protean American painter Doug Argue is brought vividly to life in "Doug Argue: Letters to the Future." Words and images explore, explain and contextualize Argue's trajectory from art-school rebel to celebrated, much-exhibited artist on a global stage.With a colossal curiosity and tireless dedication to his solitary studio practice, Argue stands as a thinker-painter admired by a growing circle of curators and collectors. His work has been shown in museums and galleries from New York (where three large paintings are on permanent view at One World Trade Center) to Sydney and from Vienna to Venice. His often giant canvases shed virtuosic light on Argue's ongoing fascinations - with history, color, perspective, literature, language, music, science and technology. Inspired by such everyday subjects as chickens, leaves, books, dead buffaloes and floating letters, Argue may explore a single theme in multiple paintings over the course of many years, always pushing for new meanings.Minnesota-born Argue's wildly expressionist early figurative paintings of hospital morgues, pool sharks, strippers and fervid landscapes earned him a solo show at contemporary Walker Art Center while he was still in his early 20s. The "sheer vitality" of those 1980s works are recalled in an essay by former Walker curator Elizabeth Armstrong, who also traces how Argue's early passions evolved to inform his most recent work.In an ambitious suite of 2018 works based on masterworks by Picasso, Mondrian, Warhol and others, Argue "challenged our thinking about Modernist aesthetics and its legacy," says writer and museum director Charles Riley. His essay digs deeply into a single Argue painting inspired by Fernand Léger, finding in it engrossing connections to string theory, linguistics, musical counterpoint and the poetry of Arthur Rimbaud.Scholar and writer Mary Frank uncovers the powerful influence of Italy, especially the 16th-century Venetian masters Tintoretto and Titian, on Argue's art and ideas. Argue has traveled widely in Italy and spent a year there as a fellow of the American Academy in Rome. Frank insightfully explores a cycle of large-scale Venice-inspired abstractions that Argue exhibited in that city during the 2015 Biennale."Doug Argue: Letters to the Future," edited by veteran arts journalist Claude Peck, contains an interview that reveals intense details of the painter's childhood as well as his years in Minneapolis, San Francisco and New York, where he has lived with his wife, noted landscape architect Mary Margaret Jones, since 2011.The lavishly illustrated book includes more than 170 color plates of work from throughout Argue's astonishing career. It is published in partnership with Weisman Art Museum in conjunction with a forthcoming exhibition of Argue's work at the museum.
×

Internationally recognized as the preeminent magazine for calligraphers and lettering artists, the a…

This book introduces the fundamentals of sign painting, allowing readers to learn about the tools, m…

With grey cotton containing paper inside. The cotton fibers create roughness to the surface, and pur…

The ProFolio Oasis Notebook is designed to simplify your search for the perfect notebook: well-desig…

Rollbahn notebooks are among the most iconic Japanese notebooks of all time.  Original Rollbahn…

With white cold pressed universal paper. Suits for all dry drawing techniques and watercolor. With n…

The general notebook has a soft, thin plastic cover. The inner paper has a 5mm grid that makes it ea…